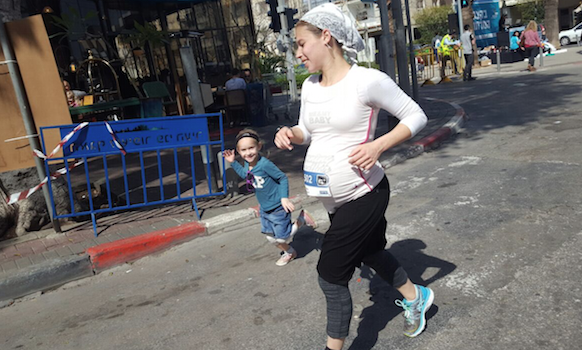 People might often think of Orthodox Jewish women as “barefoot and pregnant,” but probably don’t think of them as “pregnant and running marathons!” Beatie Deutsch, an American-born mother (of now five!) grew up athletic but stopped formal sports activities for many years when she started a family. Then, on a whim a couple years ago, she thought that setting an exercise goal would help her get back into shape. That goal happened to be a marathon, and a love of running blossomed from there.

Deutsch grew up in Clifton, New Jersey in a frum family, did gymnastics as a child, and earned a black belt in Tae Kwon Do as a teen. After getting married and having four children within six years, Deutsch ran around plenty, but hadn’t really been exercising consistently. “My son was one and husband had just done Bike 4 Chai. I said, ‘That’s it I’m gonna run a marathon.’ I knew that it would motivate me to actually exercise.” Beatie chose a marathon to start with, which was in February of 2016. She trained hard for it, running four times a week, and never missing a run. At 26 miles, most first-time marathon runners do the best they can, not expecting to win any awards except for showing up and trying. But Deutsch’s husband saw that she was running 26 miles in four hours and forty minutes. According to Running USA, the average male marathon runner takes four hours and twenty minutes to finish. He dared her to run it in 3.5 hours! She actually finished the race in 3:27. “In just four months, it was very empowering to see what my body could do.” Deutsch kept running. “When I found out I was pregnant, I said ‘I’m not giving it up so fast.’”

Deutsch’s father is an infertility specialist, so he advised her in terms of running and pregnancy: as long as she felt good, she could keep going. “I kept it up and followed my training plan for another marathon.” That turned out to be the Tel Aviv Marathon this past February. Deutsch ended up having complications during the marathon, but they had nothing to do with her pregnancy. “I didn’t [start the marathon at] the same time as everyone else. All the streets were closed off and the taxi couldn’t reach me. But in Tel Aviv, they have bike rentals. I couldn’t get the bike [unlocked]. I was flustered, pregnant, and trying to get to a marathon!” Eventually, people came and helped Deutsch finally get a bike out and she rode to the starting line. She calmed herself down and started the race which was lonely for the first half as everyone else was far ahead. When she caught up to others, they saw her and started cheering for her. “Someone told me, ‘We were running and tired and then we saw you and we were inspired to keep going.’” That gave Deutsch the motivation in turn to keep at it and finish strong. “In the end, I finished in 4:08 – not bad for 7 months pregnant!” 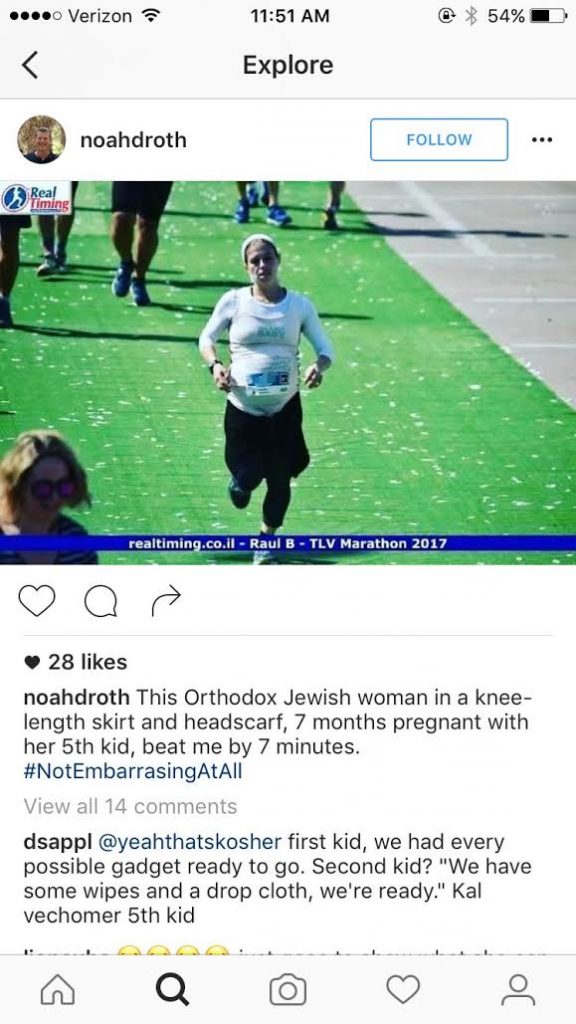 To some runners, the fact that Deutsch accomplished the run pregnant wasn’t nearly as astonishing as the fact that she did it dressed modestly. “A lot of people came up to me afterwards and told me that a secular Jewish runner had posted online about seeing me. It said ‘Who was that [pregnant woman]? She looked like a queen, I want to look like her.’ In Israel, people judge you by your appearance. I was able to give a different picture of what we as religious women can do.” To Deutsch, modesty is never contraindicated by her athletic lifestyle. “Modesty isn’t something that holds you back – it’s another way of expressing oneself. We’re not limited. We’re capable [of so much.]…Yeah I’m pregnant but I’m staying in shape, doing something that makes me feel good.”

Deutsch wishes that more people in the Orthodox Jewish world could understand the importance of being fit. “We have a mitzvah of v’neshmartahem, to care for our bodies. It doesn’t mean everyone has to run marathons, but we have some kind of obligation to take care of ourselves.” Deutsch recommends that everyone finds an athletic endeavor that they feel good doing. “If you want to start getting into shape, pick something and set a goal for yourself. If you pick a physical goal (easier than spiritual goals) starting with a small goal and watching yourself accomplish it will inspire you to keep going.” Deutsch speaks from experience with this. “I ended up finishing 6th out of all the women in the first Tel Aviv marathon I ran – I never would have thought that was possible. I just said I’m gonna run a marathon.”

Where Can You Buy Cute Modest Activewear? Whenever we post about an Orthodox Jewish woman doing something outside of the box, we are always flooded with messages from readers asking how they can do it too. So for this post, we decided to team up with Snoga Athletics which makes adorable and comfortable modest activewear, including knee length skirts with leggings attached and lightweight breathable 3/4 length tops (like what I’m wearing in the picture). I got to sample the Snoga Active Top and Mesh Basic Pencil Skirt. People, I am no Beatie Deutsch. I am a marathon couch sitter

But my husband drags me to do things like hike more often than I like, and this ensemble was cute and sporty and made me almost like physical activities. – AJ