Beatie Deutsch, who finished in a personal best time, was running in memory of her cousin who died last year 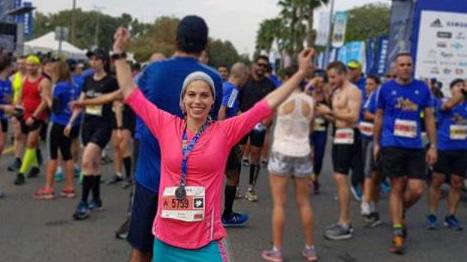 The fastest Israeli woman to finish this year’s Jerusalem marathon was an Orthodox woman, who ran with a skirt and a head-covering – and who ran in memory of her 14-year old cousin, who died in December.

Beatie Deutsch, a 28-year-old mother of five, finished Friday’s marathon with a time of 3:09:50, as reported by the Jerusalem Post. She was running the race in the Israeli capital for the first time, having taken up running just two years ago.

After finishing the race, Mrs Deutsch wrote on Facebook that “there are no words to describe my experience”, and said that 3:09 was “a time I never thought possible”.

She added: “The atmosphere in Yerushalayim [Jerusalem] is incredible, so many Jews all coming together to raise money for beautiful causes, the unity, the pride it is truly special. But what stands out most for me personally is the feeling I had of Hashem accompanying me every step of the way.”

Mrs Deutch was running the marathon to raise money for two charities: One Family, an Israeli charity that helps those whose lives have been blighted by terror attacks, and Beit Daniella, a planned therapeutic day-care centre in memory of her cousing Daniella Pardes.

On a charity fundraising page, Mrs Pardes wrote about how her “dear cousin Daniella Pardes made an indelible mark on the world. With her infectious smile, love of life and genuine care for others, she was always the life of the party.

“Unfortunately, Daniella suffered terribly from anorexia and at the young age of 14, her precious soul left this world.

“Our dream is to build a Rehab Center called Beit Daniella, for teens who are struggling with emotional challenges.”

More than 35,000 runners from 72 countries took part in the Jerusalem Marathon. The men’s race was won Kenyan runner Shadrack Kipkogey in a time of 2:21.55. Emily Chepkemoi Samoei, also from Kenya, won the women’s race in 2:52.33.