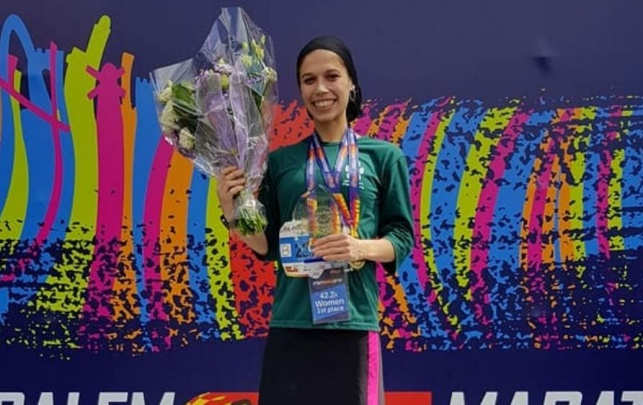 Beatie Deutsch, who immigrated to Israel from the US, runs in a skirt and head covering, and gives God credit for her success.

Beatie Deutsch is a 28-year-old Orthodox mother of five young kids. She was also the first Israeli woman to finish the 2018 Jerusalem Marathon, and did so wearing a skirt and a head covering due to religious considerations of modesty.

An immigrant from the United States, Deutsch now makes an ultra-Orthodox neighborhood in Jerusalem her home. She clocked a personal best 3 hours, nine minutes and 50 seconds, making her the fifth-fastest woman across the finish line and the 25th overall to complete the 26.219 mile course.

DEUTSCH: It’s a gift from God. I am not built to be a runner. I did some gymnastics when I was young but I do not have the long legs of most marathon runners and actually have better upper body strength. I only started running three years ago but I have been training hard.

WIN: How did you get started with marathon running?

DEUTSCH: I went from no training or even exercise for about six years. Now I have run only three marathons. I believe that anyone training hard enough can complete a marathon. In my first outing in the Tel Aviv Marathon I had a time of 3:27 which is good enough to qualify to compete in the Boston Marathon. I loved it and wanted to run more. I realized that I have the strength to improve. As it happens, I was seven months pregnant and had a sprained ankle. I ran anyway, and finished with a time of 4:08.

DEUTSCH: When I am getting ready for a race I run 5-6 times a week. I use the speed track once a week and do one long run every Friday. For the Jerusalem Marathon I did 20 mile training runs and I have run a number of times on every part of the course. That is a big advantage because I am familiar with the hills.

WIN: How good a runner can you become?

DEUTSCH: I don’t have coach and I am still an amateur runner. I am still trying to absorb my accomplishment and am not yet certain of my next goal. I may try to see how I do as a shorter distance runner. To qualify for the Olympics you need to record a time of 2:45, so there is a way to go. I do want to get a time of less than three hours.

WIN: How do you manage with a job and five small kids?

DEUTSCH: Well, my husband is incredibly supportive. He is the reason I am able to do it. He kind of coaches me and does research on training and nutrition. We also run together every Saturday night. It’s our date night. He cooks and stays with the kids so that I can run and train. He is a road biker. He thought he can beat me in a short marathon. Now he is not so sure. My kids all enjoy running and are very active.

WIN: You live in an ultra-Orthodox community. How do others view your running?

DEUTSCH: There are mixed reviews in the community. I do it modestly and try to be a positive role model. I do consult with my rabbi. I avoid running in Orthodox neighborhoods and prefer private locations to train. I totally believe that you can be 100 percent observant and athletic. I hope that my example will empower other women. In the secular world its all about an obsession to “get in shape.” I work on the body and soul as a package.

WIN: Earlier you mentioned God’s role in your success. Could you explain?

DEUTSCH: My running ability is 100 percent a gift from God. In the Jerusalem Marathon I exceeded my goal by several minutes. It was because God gave me strength to carry me through. That is my firm belief. I cannot take personal credit because it is a gift.

WIN: How do you manage your schedule?

DEUTSCH: My life is super busy with kids, work and training. There is a lot I am passionate about. Family comes first and I learned how to channel energy.

WIN: You run wearing a skirt and leggings. Does that slow you down at all?

DEUTCH: I would feel exposed if I did not wear leggings. But yes it does slow me down. Once in the US I went to a track and there was no one around so I decided to run in shorts and tank top. It was really great but I will not do that in public. I am now hoping that a religious sports wear company will come up with something for me.

Posting on Facebook shortly after the Jerusalem Marathon, Deutsch wrote, “What stands out most for me personally is the feeling I had of Hashem [God] accompanying me every step of the way.”

Deutsch supported two charities in her run. She raised money for One Family Fund, which supports victims of terrorism and their families, and Beit Daniella named for Deutsch’s cousin, Daniella Pardes, who took her life in December at the age of 14, after battling anorexia. She posted, “Our dream is to build a rehab center called Beit Daniella for teens who are struggling with emotional challenges,” said Deustch.