We’ve been kvelling all week about Beatie Deutsch, a religious mother of five in Jerusalem who had the fastest time of any Israeli woman in the Jerusalem Marathon. Beatie, a Har Nof resident who made Aliya from NY, ran the 42.2 km course on Friday in just 3:09, making her 25th overall and first among Israeli women.

Beatie was kind enough to make some time for us at Janglo to tell us her story. We were surprised to learn that she has been running for only three years, and found her inner strength and character to be even more impressivee than her running accomplishments. Here’s what she had to say.

Tell us about your background? Where did you grow up? When did you make aliya? What do you do now?

I grew up In New Jersey and came to Israel for seminary. I met my husband the year after, when I was a madricha at a different seminary. I made aliyah that year (2009). We lived in Beitar for the first 3.5 years and then moved to Tucson, AZ for two years where we worked on campus at University of Arizona. We moved back to Har Nof 3.5 years ago and I currently work as the director of Follow Up for Olami.

When did you start running? What are your best running accomplishments and/or the ones you are most proud of?

I started running only three years ago and it’s been a totally wild journey. I basically went from 0-marathon. I was tired of feeling out of shape after having 4 kids in six years and not exercising at all, so I announced to my husband, “That’s it — I’m running a marathon” I had no time goal when I started training, but ended up finishing with a Boston Qualifying time of 3:27…it was surreal. In 2017, I ran TLV marathon at 7 months pregnant, another accomplishment I’m very proud of.

Did you face any challenges in your training? How did you overcome them?

I definitely faced some challenges. This time around it was anemia, which led me to discover I had celiac disease. It really compromised my training, and when I found out how low my hemoglobin was (after also feeling the effects) I basically thought my chances of winning Jerusalem were over. But I tried to stay positive because I believe that’s the only way to get through life. Thank God, after taking iron and going off gluten, I rebounded really quickly.

You mentioned that you ran to support the One Family Fund and Beit Daniella. Can you tell us more about those?

One Family Fund is an organization dedicated to providing physical, emotional, and monetary support to victims of terror. I ran the marathon in memory of Hallel Yaffa and to raise money for victims of terror in Israel. Too many families are shattered from acts of terror, One Family Fund helps repair them. The second cause I raised money for hits really close to home. Our dear cousin Daniella Pardes made an indelible mark on the world. With her infectious smile, love of life and genuine care for others, she was always the life of the party. Unfortunately, Daniella suffered terribly from anorexia. After a 3 month hospitalization, Daniella was not healthy enough to return to a school structure nor to the friends whom she loved. However, there was one place that she found refuge – Ofer’s Kalbia (therapeutic dog kennel) on Moshav Ora. While she had little ability to love and care for herself, she had an endless supply for the dogs. Every morning without exception, she would spend 3 hours lovingly caring for them. After a few months, it was time to integrate Daniella back into society. Her mother, Hadassa searched for a therapeutic program which could absorb, protect and at the same time mainstream her back into her world. She never found one suitable to her needs. On December 11, 2017 at the tender age of 14, Daniella took her own life.

Daniella’s parents and family are incredibly loving and dedicated people. They are constantly thinking of other people and putting others needs before their own. Now it’s our turn to give to them. The pain of this tragedy is incomprehensible and the Pardes family has been left with a gaping hole in their hearts and home. Together we can make a difference in this world in Daniella’s memory. Our dream is to build a Rehab Center called Beit Daniella for teens who are struggling with emotional challenges. This rehab program will incorporate therapeutic dogs and provide the teens with individual learning, personal therapy and the chance to become dog trainers. The goal of this short term program is for them to return to their regular routine and daily life, as well as conventional schooling. Hopefully we can prevent more teens from struggling the way Daniella did and give them a chance to rebuild their lives. Please donate generously to make this dream a reality.
https://thechesedfund.com/cause/beit-daniella-therapeutic-rehabilitative-day-center
(To learn more about Beit Daniella, check out www.beitdaniella.org)

You have instantly become a role model and hero for a lot of Anglos, especially women. Do you have any message you’d like to share with them?

Several messages for women – You can do anything in a skirt…the world may tell you otherwise, but don’t give up on your passions because you think you can’t do it modestly. I feel like I have come full circle because when I was 12 I stopped doing gymnastics because I couldn’t wear leotards in front of the male coaches. And now here I am showing the world that you can run a marathon and win, while dressed 100% modestly. Don’t compromise your values, believe in yourself and go after your dreams 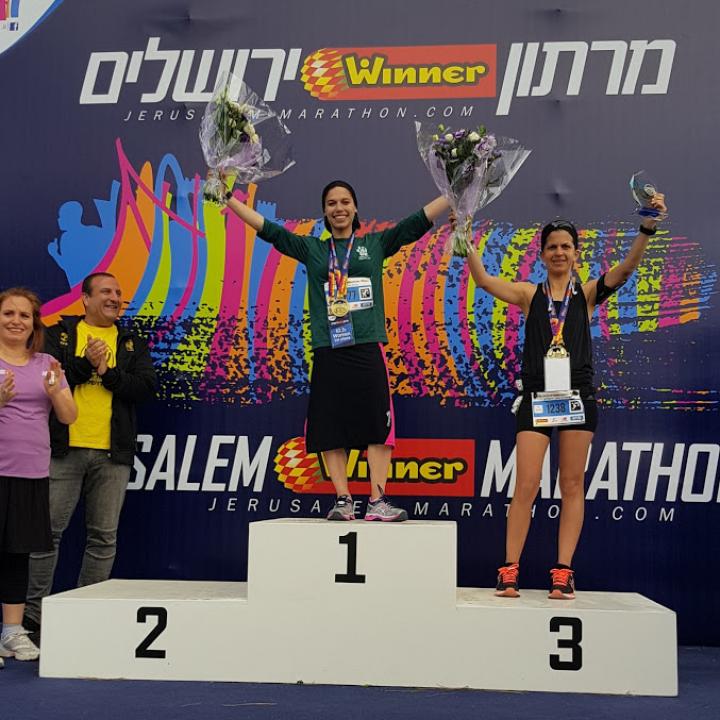